I love watching movies no matter if they are being shown on TV, watching a DVD, or by far my favorite way to see a movie, by going to the movie theater! And beyond the watching the movie itself, another thing I really like about going to a theater here in Japan is checking out all of the movie souvenirs that are for sale at the theaters themselves. I don’t often buy much, but I do like checking out the goods themselves and occasionally picking up something for those movies that I really loved. Every time I check out those shops, it reminds me that there aren’t usually shops that sell movie good at movie theaters in the U.S. At least not at the movie theaters I used to go to.

When I was a little boy though, one piece of movie memorabilia that was often made for movies that were geared for kids were movie storybooks. These were great books filled with pictures from the movie and they also told the basic story of the movie itself. They were made and sold at stores not only as a way to advertise the movies and as another way for the movie studios to make a little extra money, but also as a way to help kids get or stay interested in reading. The four that I still have, as seen in the picture in this post, are for the original Superman movie, Ghostbusters, E.T, and Return of the Jedi. In many ways I can’t believe I still have them after all of these years, but I also can’t imagine getting rid of them. They are just way too cool to possibly throw away! I was a bit curious if they may have become collectors’ items these days since all of the movies are still very popular, but I was surprised to find out after a quick internet search that they might only be worth about $20 each at most. But no matter what, they are priceless to me because of the memories I have connected with them. 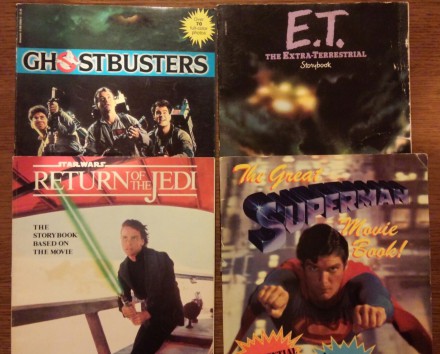