It’s been a while since I’ve consistently sat down to watch pro wrestling, mainly because I’ve been so busy with other stuff.  But when New Japan Pro Wrestling announced it was coming back to Nagoya with a big event, I couldn’t miss the opportunity to go see a show.  I’ve been to hundreds of live events in my life, from concerts to all kinds of different sporting events.  But pro wrestling shows might actually be the most fun of them all. The atmosphere is great and the matches, especially in NJPW, are usually excellent.

“Sengoku Lord in Nagoya”, which was held at Nagoya’s Dolphins Arena, boasted two title matches and an undercard packed with some of the biggest names in Japanese pro wrestling.  We arrived in time for the gong, and the show got started with a really fun match between some of the organizations “Young Lions” – the young, aspiring wrestlers in New Japan.  There was only one match that wasn’t necessarily great, but it was still quite fun. My two favorite wrestlers appeared on the card and there was even a little bit of fun drama at the end of the show. I had a great time, and since the show ended I’ve been really in the mood for more pro wrestling! 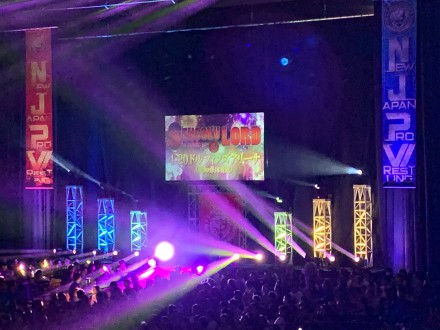