Back home in America, my kitchen may have been old and equipped with sea-foam green laminate counters, but it was four or five times the size of my kitchen here in Japan, had significantly more cabinet and counter space, came equipped with a full-sized oven, and had a KitchenAid mixer. I love baking, and it was quite easy with so much storage space for my six types of flour, three types of sugar, and so-on. Oh, the dessert masterpieces I made! Especially around the holiday season: pumpkin everything! I miss my American kitchen quite a lot, but I won’t let limited counter and storage space stifle my baking creativity!

In that spirit, I attempted my first baked good this May: chocolate brownies with sprinkles.

I may not have a full-sized oven, but I do have a convection toaster oven! It’s programmed in Celsius, not Fahrenheit, though, so I wrote up a chart in advance as a temperature conversion cheat sheet. Then I mixed my wet ingredients, added the dry, and produced a delicious brownie batter. All seemed to be going well when I put the greased pan in the toaster oven and watched the chocolate bubble inside. It certainly smelled good! But after the timer beeped, the brownies were completely raw. So I cooked them a little longer. Then a little longer again. And finally they were done!

Oddly, the brownies had…puffed up significantly. And they were soft and moist but not remotely gooey. That’s when I realized: I had accidentally made chocolate cake!

Upon reflection, I mixed up the temperature conversions in my chart, and ended up using the temperature for cake (375 degrees Fahrenheit/190 degrees Celsius), rather than the temperature for brownies (425 degrees Fahrenheit/220 degrees Celsius), resulting in the soft, sponge texture so typical of cake, not the crisp outside and gooey inside of brownies. Whoops! Cake and brownies are virtually identical to start with: they use the same ingredients, combined in the same order. The difference is baking time and temperature. Cake bakes for a long time at a low temperature, resulting in an spongy, moist, uniform texture. Brownies cook for a shorter time at a higher temperature, which is why the outside is crisp while the inside is soft and gooey.

I try to learn from my mistakes, so my second attempt at brownies went quiet differently.

My first fraught attempt was a bit of a cheat: I used a store-bought mix. My second attempt was far more labor intensive: brownies from scratch. It took four hours, but the final result was not to be trifled with! Admittedly, a significant portion of that time was dedicated to cubing the brownies for consumption at the Hello!s ice cream party, but that’s neither here nor there. Below is a picture of the successful brownie bites, freshly pulled from the freezer. Yum yum! 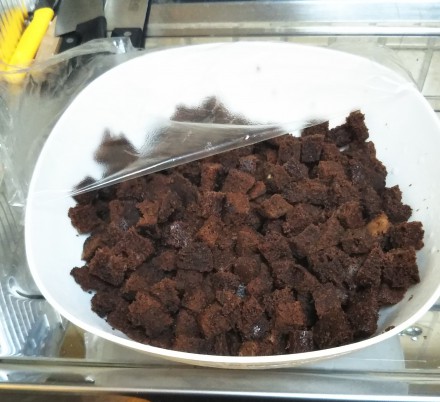