In the American comic scene there is a big feud over two popular comic creators. These comic creators are Marvel comics, and D.C Comics. The feud revolves around which of the two comic brands are better. Whenever I met a new friend the same question eventually comes up, “D.C or Marvel?” this question usually doesn’t make or break a friendship but it can tell you a lot about someone. The  arguments for and against these comics creators are usually pretty bias but some good points are made. One of the arguments made is that Marvel comics recently has been increasing it fan base with the creation of the Marvel cinematic universe, with movies such as Captain America, Iron Man, and Spider-Man. It is hard to deny this, because of how anticipated the films are every year. However this is not reflected with the sales of comics as D.C has been slightly higher than Marvel.  Another point that is mentioned is that D.C seems to be struggling with some of its most recent films, and shows, but as mentioned before this does not seem to reflect on the popularity of the D.C comic books. It’s tough to say which of the two is better, but personally I am a huge Marvel fan and still I enjoy a good D.C comic.  To this I say, “Don’t follow the hype, but follow your heart.” 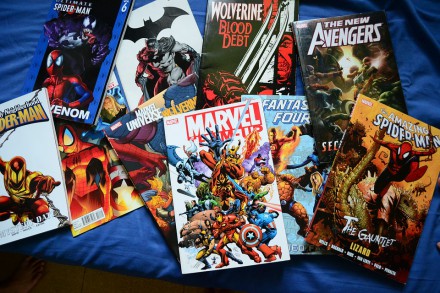