I’ve previously made cake that was supposed to be brownies, in addition to actual brownies, and even some mini cheesecakes. This time, I made muffins.

It wasn’t all smooth sailing, however. One ingredient I’ve been struggling to find in my local supermarket is baking soda. I don’t know why, but I just can’t find it! And that’s unfortunate, because it’s a very important leavening agent. Without it, whatever I’m baking won’t rise. With brownies, this wasn’t a problem; they’re supposed to be dense. Cheesecakes also don’t rise. How did the brownie cake rise without baking soda? …That is a mystery that remains unsolved. But in this case, I was trying to make muffins, which definitely need to rise. Except, I couldn’t find baking soda. So, what did I do?

Baking soda, as I mentioned, is a leavening agent. Or to put it more academically, it’s a base. If you combine it with an acid, you’ll get a reaction. Baking soda, or sodium bicarbonate, when combined with an acid will generate carbon dioxide. This is a gas, so it rises in an attempt to escape; this results in your tasty baked goodies also rising, as the carbon dioxide pushes up and out of the batter. Except I had no baking soda! So how was I supposed to trick my muffins into rising? Well, I went in the opposite direction. Instead of using a strong base (baking soda) and a weak acid (milk), I reversed the strengths. I used a weak base (baking powder) and a strong acid (lemon juice) to generate a similar response. This is slightly less desirable, because lemon juice has a strong flavor that isn’t necessarily desirable in chocolate chip muffins, so I had to further modify the recipe to accommodate this addition. I substituted a quarter cup of the flour with unsweetened cocoa powder, and the strong chocolate flavor successfully disguised the two teaspoons of lemon juice.

Aaaaaand, finally I had my muffins! They didn’t rise quite as much as they normally do in America with baking soda, but they did ultimately rise. And they were very moist and delicious. All in all, a successful chemistry experiment.

(I’d still like to get my hands on some proper baking soda, however.) 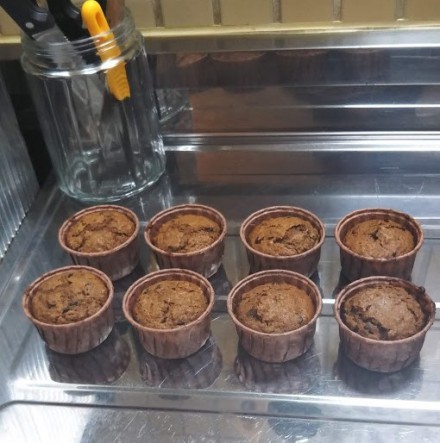