I love my laptop. It was a graduation gift from my parents, back in 2016. It’s my first computer with an SSD, plus it has half a terabyte of storage – twice as much as my previous computer. This laptop was one of my favorite companions post graduation and accompanied me through good times and bad. I customized her liberally, rebuilt my entire file storage system, learned new skills, and generally enjoyed spending time messing about and living life. So you can imagine how distraught I was when the battery capacity started collapsing.

It started in February. The battery’s endurance suddenly decreased. I certainly couldn’t go around without the power cord on me anymore, which was annoying, but not a catastrophic loss. The battery capacity decreased from three hours to one, which is still bearable if inconvenient. Still, I knew there was a problem and that I’d need to replace it. This isn’t my first laptop, nor is it the first battery I’ve had to replace.

However, I was unable to find an appropriate replacement battery on Japanese sites. That was okay, though! Because my parents were coming to visit in March, so if I ordered it on an American site, I could get cheap shipping, and then my parents would bring it over when they visited. And, even better, my dad, who’s an IT guy, could do the actual replacing.

Things soon went awry, however. Because corona shut down all travel in March. So my parents never arrived. And the battery I’d bought sat unused in my parents’ living room. Shipping restrictions disallowed them from sending it to me themselves, so it would continue to sit in the meantime. We figured that was okay, though. My current battery wasn’t a catastrophic loss yet; if I moderated my computer usage, I should be able to stretch it until I visited home in August.

We didn’t make it to August. After a single session trying out Zoom on my laptop, the damage became catastrophic. It wasn’t going to last until August. Nobody was visiting me from America anytime soon; I wasn’t going back to America anytime soon; and shipping companies refused to ship the already purchased battery. My family couldn’t ship it themselves, but we’d bought it online, so clearly companies could. Meaning the only way I was getting that battery to Japan was by buying yet another one and having it shipped here directly for an exorbitant cost. Plus, y’know, the cost of re-buying the battery.

Third time’s the charm, I guess, because I was able to re-buy the battery from a different company that DID offer shipping to Japan. The price of shipping was almost three times that of the battery, but it arrived pretty quickly!

Of course, then I had a whole new problem: installing it.

The previous plans involved my dad doing it. He’s good at that sort of thing, and the last time my battery failed, he did the install. However, now I had a battery and no dad. So what to do?

I seriously considered taking my computer to a repairman and paying who knows how much to have him do the work. However, sinking even more money into this project wasn’t appealing. I also considered asking one of my tech-savvy coworkers to do it and paying him for his work, but everybody was very busy with Zoom and I didn’t want to impose on their time. So I decided it was time to start adulting and replace the battery myself.

My dad was kind enough to send a YouTube video of a guy explaining the entire process step by step. It seemed feasible, but I was missing a screwdriver. I sank even more money into this whole endeavor to buy one of the correct size. And then one Saturday morning, I sat down and opened up my laptop. The battery replacement was straightforward and not difficult at all. Additionally, with my computer opened up, it was the perfect opportunity to clean out any dust or other debris that had gotten inside the casing. Then I closed her up, and cleaned the keyboard, screen, and ports from the outside. She was beautiful.

And moreover, she turned on. And charged! After all that turbulence, the adventure ended happily. 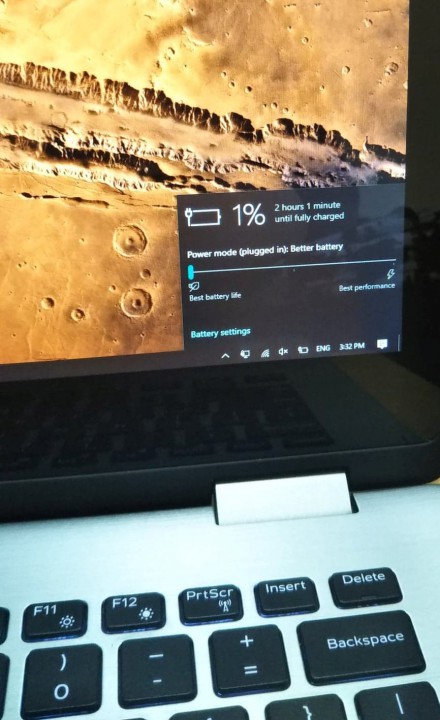