Over the vacation, since I couldn’t go back to America to spend the holidays with my family, I was feeling rather homesick for Western food (which is a rather unusual state of affairs for me; I generally prefer east Asian food to Western food). As a result, I learned some new recipes to bring the West to me!

The easiest recipe to learn was Irish soda bread.

It’s not called “soda” bread because it uses, like, cola or other such soda. The “soda” is instead “baking soda”. Unlike yeast, when you leaven with soda, you don’t need to leave your dough to proof somewhere warm for four hours. Instead, you just pop it in the oven, and the heat of the oven in combination with acidic ingredients in the recipe (buttermilk, in this case) produces carbon dioxide bubbles that escape, puffing up the dough and leaving behind many small bubbles for maximum fluff. I usually make peasant bread, with is leavened with yeast. Peasant bread is the easiest, most basic bread on earth. It only has five ingredients. However, because the leavening agent is yeast, you’re left sitting around for several hours while the yeast feast and produce CO2. With soda bread, there is no wait! Granted, it uses a lot more ingredients, but because there’s no proofing stage, it’s way quicker.

Both breads have their pros and cons. However, I’ve been making lots of peasant bread in Japan anyways, so the novelty of Irish soda bread was really refreshing.

Next, I needed something to enjoy my bread with. Keeping with the Irish theme, I decided to learn a potato soup recipe.

I’ve made a variety of soups in the past, but none that required turning any of the ingredients into mush to work haha. That was definitely a new experience. Aside from the inconvenience of cooking the potatoes and then having to wait awhile for them to cool off, creaming the potatoes wasn’t difficult at all with my little blender. I shudder to think of making a larger portion of soup, but for just me my little blender sufficed. After that it was smooth sailing. Add cream, mix, warm up, and serve with a couple slices of bread! 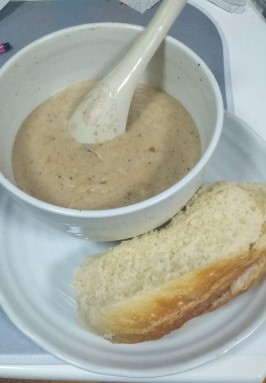 Unfortunately, in the time between making the soda bread and making the soup, I ate all the soda bread. So pictured above is the potato soup paired with peasant bread, instead! I highly recommend both options, personally. They’re great for dipping.