I’ve always liked potatoes. The best part about visiting Ireland was getting to enjoy potato everything – potato bread, potato soup, mashed potatoes… It was potato heaven! However, if the potatoes in question weren’t of the particular, like, two varieties I had already eaten before, I was vehemently against even trying them. When my family went to Paris, I ordered toast at a restaurant and they put peanut butter on it; even though I liked toast and I liked peanut butter, I absolutely refused to try the peanut butter toast, because it was something new and I didn’t trust it.

Since my teens, though, I’ve been trying a lot harder to be less picky and try new foods. This especially went into high gear when I discovered that Asian food is, like, the bomb in late high school and university.

Now, I live in a foreign country. The supermarket offers a variety of foods – many familiar, many not, and many familiar foods entirely absent. Unless I want to live the most boring culinary life, it was time to really get adventurous and not only try new foods, but reassess foods I’d previously despised.

So, in that spirit, I started buying and roasting Japanese pumpkins, called kabocha. They aren’t like the pumpkins I’m used to in America, but squash is squash and I do love squash. That experiment was wildly successful. Oven-roasted kabocha is to die for, in my humble opinion. However, when I went to the store with the specific intent of getting more pumpkin for roasting, I was sadly disappointed to find that they were out of stock. But I still wanted roasted…something. I had a craving! So I decided to reassess my childhood hatred of sweet potato.

To that end, I bought some sweet potatoes, cut them up, seasoned them, and roasted them in the oven. 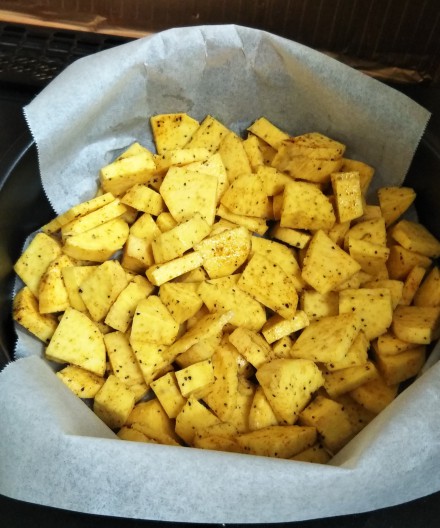 They looked like sliced bananas! They did not like that, though. In fact, they weren’t terrible! Nor were they amazing. Actually, I found the roasted sweet potatoes to be profoundly bland, in spite of all the seasoning.

So, that was a disappointment. Trying new things can lead to exciting new culinary discoveries (like roasted kabocha!) or they can lead to…meh (like sweet potatoes). That’s the give and take of adventure, I guess. Still, I don’t regret trying them. I’ll just keep in mind to invest my money in squash instead in the future.