For Christmas, my mother got me this tiny, little waffle maker. I’m not usually a waffle person, personally, but I’m hardly offended by them. Sometimes, it’s just nice to have some warm, syrupy, homemade waffles. I can’t do that without a waffle maker, so I haven’t had waffles in…at least three years now, possibly longer.

However, I decided to take out the waffle maker on a whim, and I didn’t check that I had all of the ingredients on hand before I started. So, when I realized I was missing something pretty crucial, I had to get creative.

On this particular waffle day, I was out of milk. So, I scoured my cabinets and discovered a can of coconut milk. Coconut has a pretty strong and distinct coconut flavor, and I knew there’d be no hiding its presence in the batter. So, why not embrace it and make my waffles completely dairy free? Since I was already replacing the milk with coconut milk, I decided to also substitute the butter with coconut oil, which I also have rather a lot of. And just to further the coconutty flavor, I greased the waffle maker, not with butter or canola oil, but with yet more coconut oil.

This whole process resulted in some fantastically coconutty waffles, which is not a flavor I’d previously tried haha. However, it was a flavor I found that I quite liked. I think in the future, even if I do have milk on hand, I might just continue making coconut waffles instead. I’d also like to try it with other dairy substitutes, like almond milk or soy milk or something. That seems like it’d add another interesting flavor. I see many waffle adventures in my future… 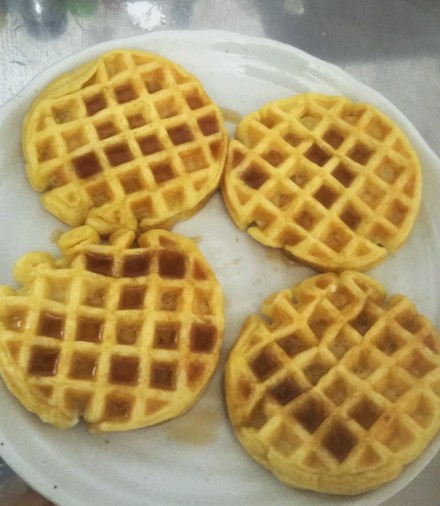