Hey there everyone, it’s Erica here! Do you like theme parks? How about water parks? What about Disney? Well, if you answered “YES” to any pf those then this blog is for you! Today we’re going to talk about one of the two water parks at Walt Disney World in Orlando, Florida!

Disney’s Blizzard Beach is a water theme park located at the Walt Disney World Resort in Bay Lake, Florida near Orlando. All water areas are heated exception the melting snow in the ice cave of Cross Country Creek.

The park opened on April 1, 1995 and was the third Walt Disney World water park. In 2016, the park hosted approximately 2,091,000 guests, ranking it the third-most visited water park in the world!  Blizzard Beach is open year-round which is made possible by the mild climate in Florida.

According to Disney “legend,” a freak snowstorm on January 11, 1977, in the area led to the development of Florida’s first ski resort. Ski lifts were put up, toboggan runs were laid down and an entire resort area blossomed around the mountain of snow. Naturally, because of the normal temperatures in Florida, the snow dissipated very quickly, and the snow rapidly turned into slush. This left behind a collection of waterlogged yet snowless ski jumps and chair lifts. The operators were preparing to cut their losses and walk away. However, they were interrupted by a loud yell coming from the summit of the mountain of melting snow and looked up to see a blue alligator sliding down the mountain at top speed. Ice Gator, the mascot, then landed in a pool of melted snow at the base of the mountain with a thunderous splash. The ski resort operators suddenly saw the park’s potential, and the mountain of snow became Disney’s Blizzard Beach, “the most slushy, slippery, exhilarating water park anywhere!”

Slalom courses, bobsled, and toboggan runs became downhill water slides. The creek of melted snow that formed at the base of the mountain became a relaxing tube ride. The chairlift carried swimmers instead of skiers. The ski jump became the tallest and fastest water slide in the world.

The majority of the major attractions at the park are hosted atop of Mount Gushmore, an artificial hill with an elevation of 90 feet . Mount Gushmore is split into three colored slopes: Green, Red, and Purple.

The park’s whimsical and imaginative concept was conceived by designer-Imagineer Marshall Monroe. Innovative elements of the park include a beach chair-themed chair lift, complete with beach umbrellas, and pretend snow skis. The setting and atmosphere of the park are marked by a unique blending of tropical landscaping with simulated melting snow throughout. The mountain is a unique engineering structure constructed in a challenging setting – a high water table Florida woodland. And the architecture is a playful intersection of alpine lodges with Caribbean colors and accents. 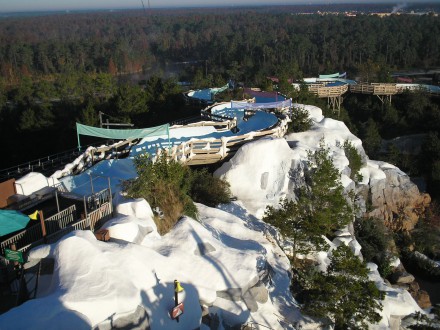