I hope you’ve all been enjoying my blogs about the Disney parks! This week we’re going to look at the second of Disney World’s two water parks, Typhoon Lagoon!

Disney’s Typhoon Lagoon is a water theme park located at the Walt Disney World Resort in Lake Buena Vista, Florida near Orlando. It is the second water park to open at the resort, preceded by Disney’s River Country which closed in November 2001.

The park, which opened on June 1, 1989, is home to one of the world’s largest outdoor wave pools where you can even bodysurf. The park is themed around the idea that a typhoon wreaked havoc upon a formerly pristine tropical paradise. Ships, fishing gear, and surfboards are strewn about where the storm flung them. Its centerpiece is “Miss Tilly”, a shrimp boat impaled upon a mountain named “Mount Mayday” that erupts a 50-foot geyser of water every half hour, right before the bells of the watch sound on it. Its mascot is “Lagoona Gator”.

In 2016, the park admitted approximately 2,277,000 visitors, currently making it the second most visited water park in the world.

Mount Mayday, located behind the surf pool, features “Miss Tilly” as well as many of the waterfalls and slides. It is a man-made mountain which not only provides launching areas for the water slides but also conceals the pipework.

The main engineering works performed in 1988 and 1989 featured studies, design, and tests on water wave generation and propagation. As the Typhoon Lagoon was one of the first wave-makers applied to a theme park, one of its prime objectives was to produce surfable waves. Waves are generated by a 12-cell prestressed concrete tank in the background of the lagoon covered with the shipwreck scene. Computer modeling techniques were used at the time to study fluid-structure interaction, stress concentrations, and fatigue to ensure integrity and safety. Prior to its opening, the Typhoon Lagoon was tested to determine wave shape, surf-board ride duration, and the extent to which the waves give a natural feeling as they propagate and break on the artificial beach downstream. 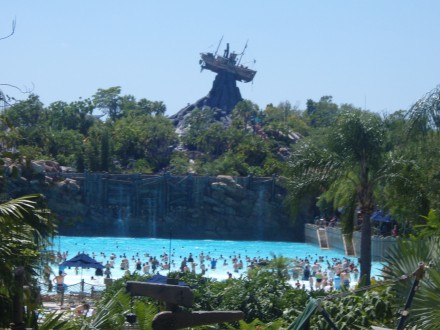